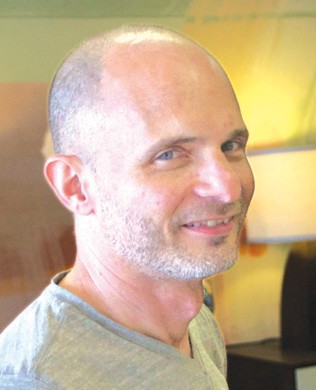 But Palm Beach Gardens has a budding district of its own.

Mr. Kupritz joins a growing arrayay of shops at Northlake Commons, home to Home Depot and a True Treasures annex.

In the past year, Palm Antique Mall has expanded to new quarters next to True Treasures, and Just in USA, another antiques shop, has moved a larger space just south of there. Antique Treasures Gallery Inc. is sandwiched in between. Pandora’s Box is set to officially open in October next to Mr. Kupritz’s shop. And farther up the road, Bill Jacobson has debuted I Found It!, which has a similar midcentury vibe to Mr. Kubritz’s space, on Alternate A1A north of Northlake Boulevard. 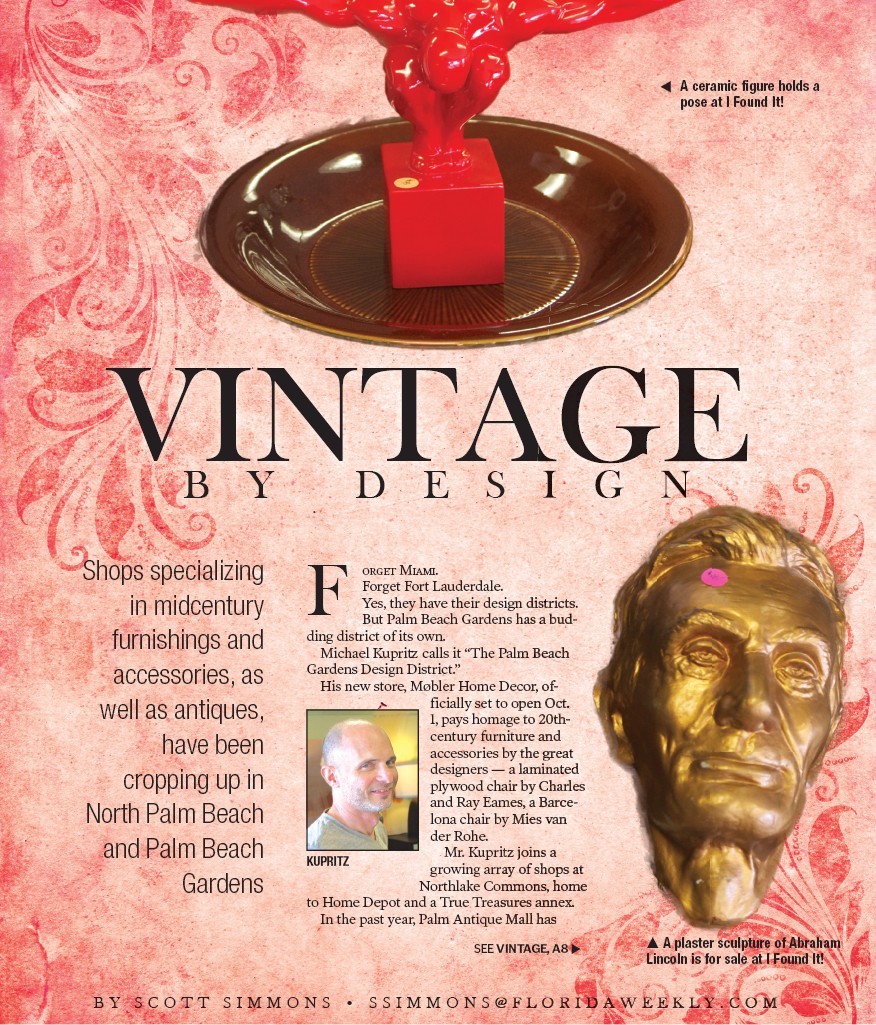 It has a certain appeal.

“I think really it’s just that the ’60s in particular and midcentury in general was the age of design. It was made to be beautiful and functional at the same time,” Mr. Kupritz said. “Everything that was coming out of Scandinavia and Italy and other places at that time was designed to be both beautiful and functional, not only that but the quality was at its peak as well.” 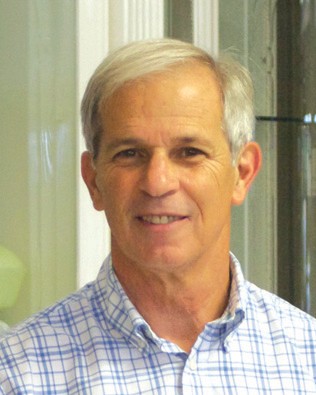 Perhaps it is a way of recapturing his youth.

“My parents, in their first apartment in New York, had Danish modern furniture. I never noticed it because it was what my parents had. Then they gave all their things away without asking me,” he said.

Mr. Jacobson saw a practical need for a store.

“First of all, I always wanted to have a brick and mortar location. I had one in West Palm Beach years ago, but it was a weekend-only location,” he said. He also runs the West Palm Beach Antique & Flea Market, which resumes Oct. 6 on Narcissus Avenue in downtown West Palm Beach.

Northern Palm Beach County is an area with economic potential.

“I felt the success of the stores in that Northlake corridor was indication that it was a good place to be. Success breeds success,” Mr. Jacobson said. “The growth in new homes and sales of existing properties has been strong up there. Quite frankly, it leads me to believe there’s a little bit higher per capita income in the area as well.” 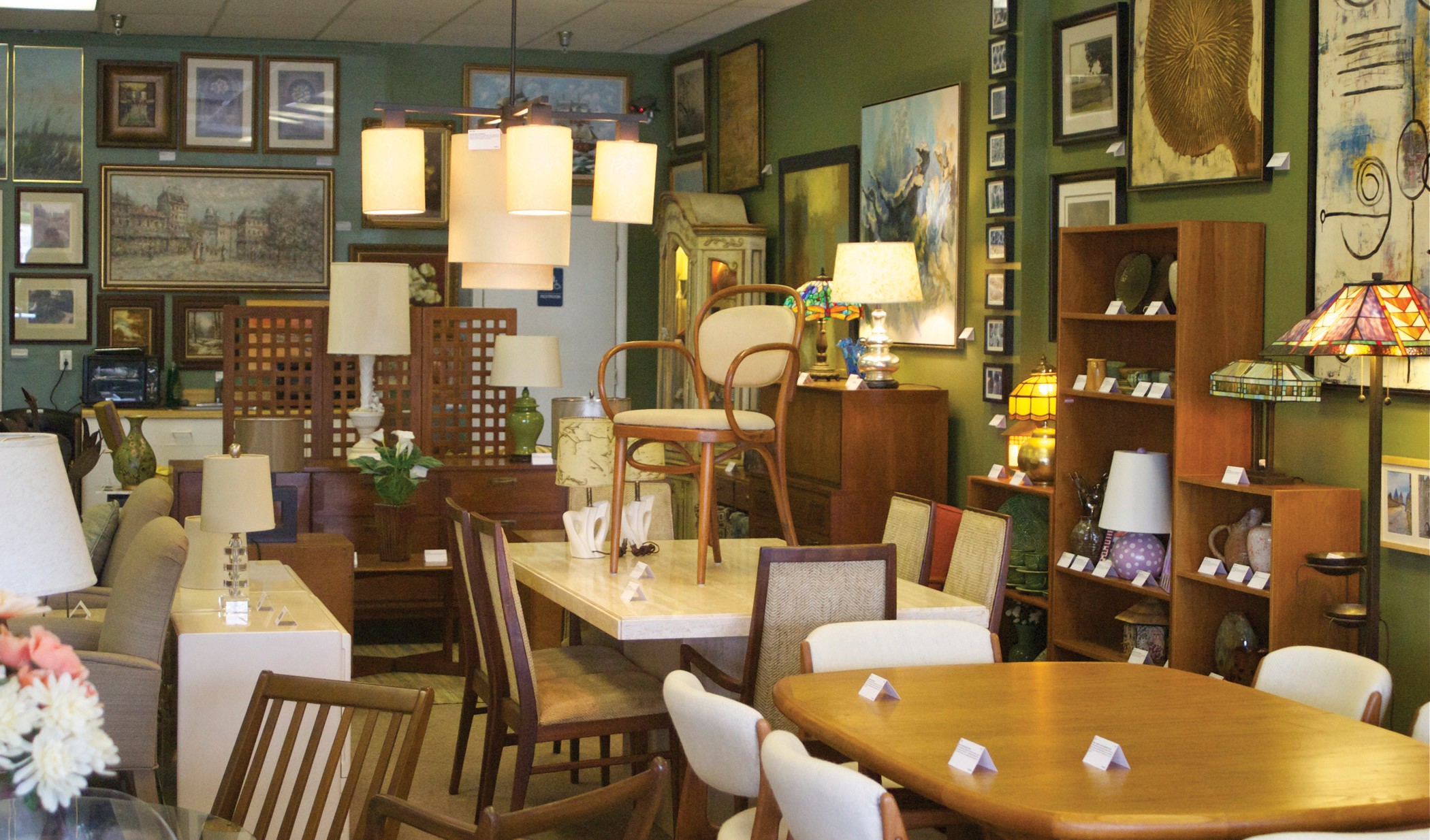 Mr. Jacobson, whose day job is as a lawyer, is passionate about antiques and design, especially from the 1950s, ’60s and ’70s.

His shop may remind visitors of sets from “Mad Men.”

“First of all, I love the colors. I will tell you that there’s a huge collection of ashtrays, both cigar and cigarette ashtrays, in my store,” he said. “The reason I started my collection was because the colors are fabulous — the browns, yellows and greens. That combination is pretty explosive in my eyes. I’m just drawn to it.” 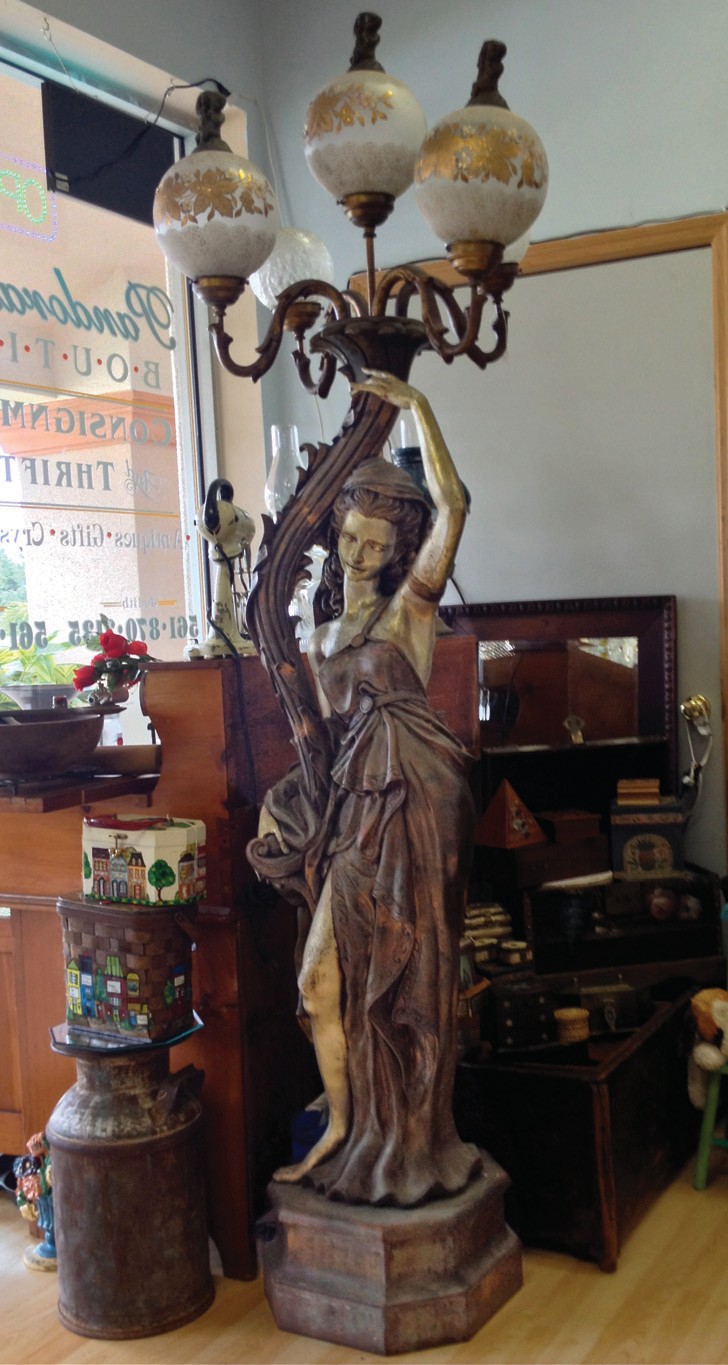 This sculptural lamp is the mascot at Pandora’s Box in Palm Beach Gardens.

These objects are not the traditional antiques of Victorian frills and Georgian curves.

“When I started in this business, collecting on my own, I really liked antiques, and I think a lot of people were still collecting dark-wood antiques,” Mr. Jacobson said. “That market dried up around here, and midcentury became popular.” 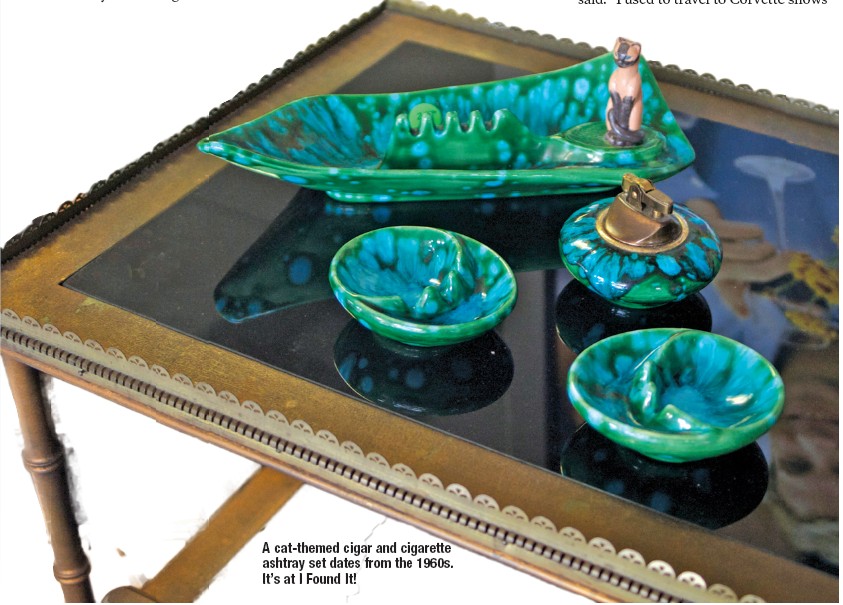 A cat-themed cigar and cigarette ashtray set dates from the 1960s. It’s at I Found It!

“I had an antiques store in Baltimore 25 years ago, and I sold what is referred to as brown furniture. It was mahogany, inlaid with satinwood, very formal. That’s what was popular,” he said. “Now people are coming back to midcentury modern. They want things that are more fun, more expressive of their taste. They’re not so concerned about sticking to some strict guideline. They want to enjoy their interiors.”

Both men are passionate about the items they sell.

“I’m what you call a compulsive buyer. Maybe like a lot of shop owners,

I think the reason we go into business is because we have exceeded the amount of space we have in our homes,” Mr. Kupritz said.

“A lot of it came from my personal collection,” Mr. Jacobson said.

The same could be said for Judith Westerfield and Joyce Craig, owners of Pandora’s Box.

“At the bottom of Pandora’s Box is hope. So when she let out all these uglies, there was hope,” said Mrs. Craig, a passionate collector who has finally translated that passion into a storefront.

She had a space at Palm Antique Mall and did well there.

That inspired her to do more. She has a booth each month at the West Palm Beach Antiques Festival, at the South Florida Fairgrounds. 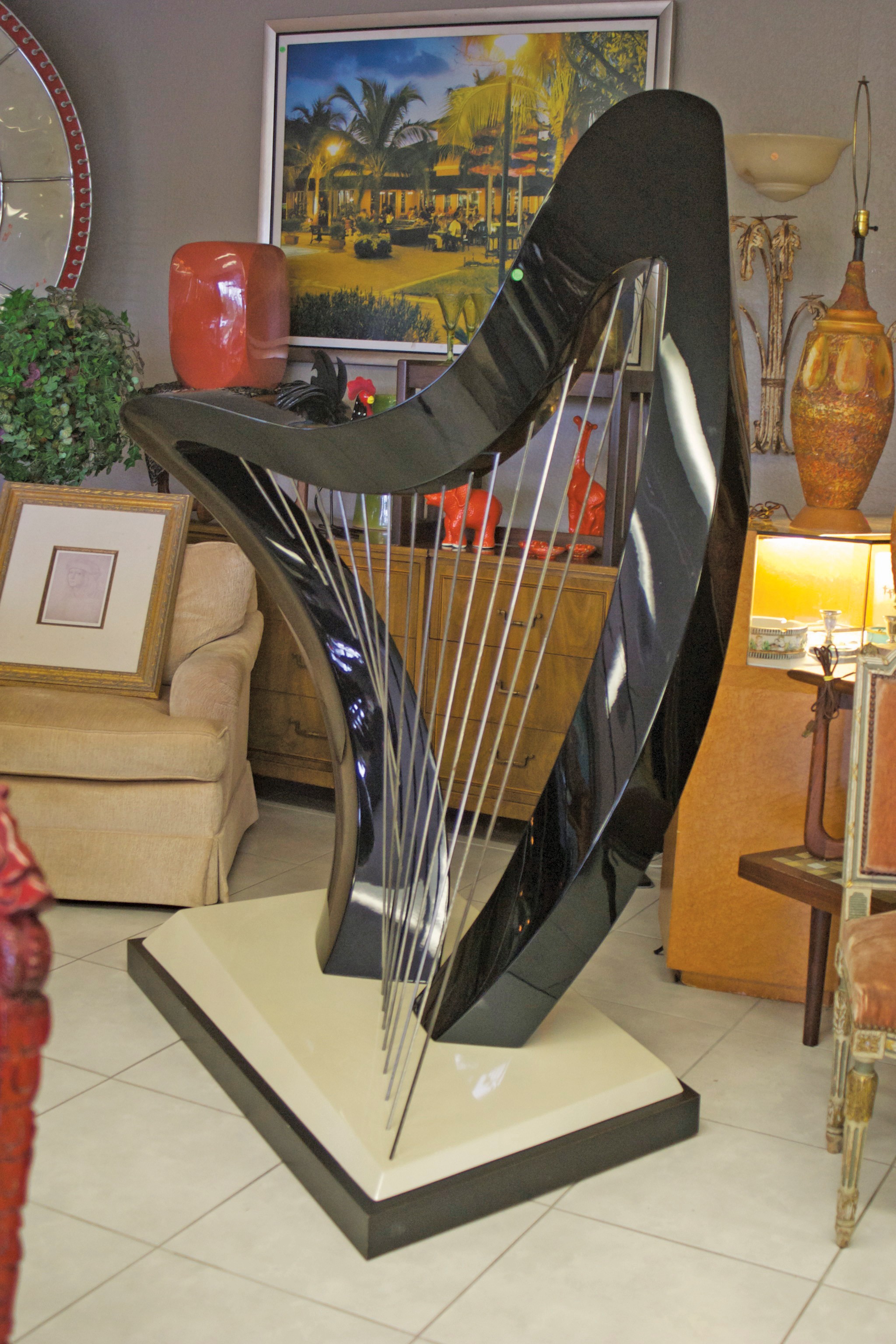 Harp sculpture at I Found It! originally was part of a display.

“I’ve been collecting all my life, my mom’s been collecting. It’s been an extension of my collecting,” she said of her retail venture. “It’s rustic. Country antiques. I like dirt, rust, Tennessee mud. I go picking in Tennessee in barns, cellars.”

But traditional antiques have not been selling well, at least not in South Florida, where shoppers want lighter items with clean lines and a tropical vibe.

“I have rustic antiques, like with my cast-iron stove. There are people who do the rustic, dirty Bible-belt antiques. There are a lot of people who don’t do that. They don’t think they’re worth anything,” she said. 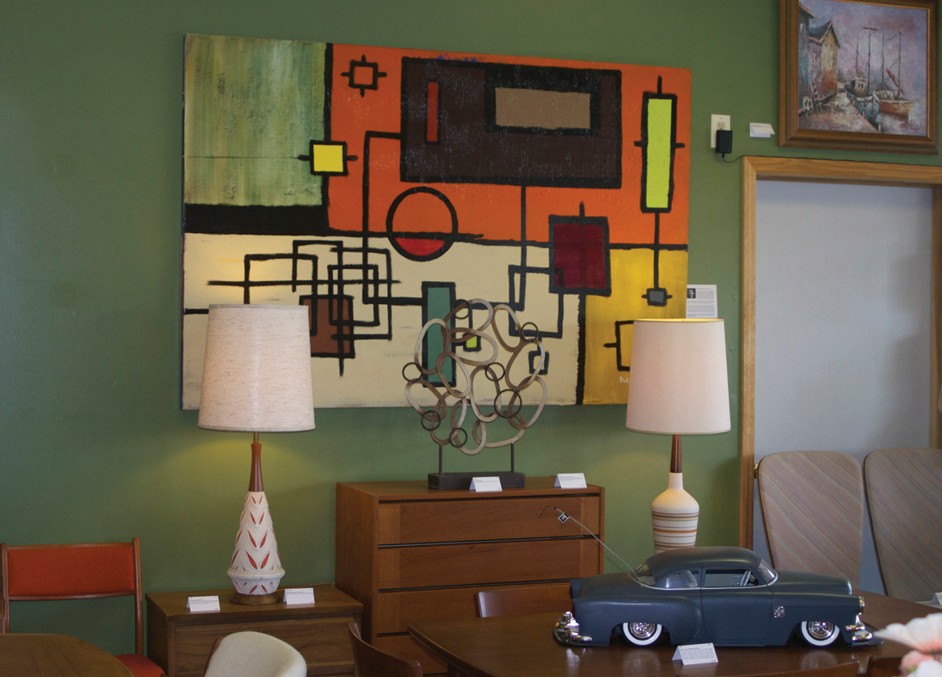 But there are enough customers to make it worth her while.

Ms. Westerfield, her business partner, said she once had a store on Worth Avenue.

She walks to the back of the store, which is filled with clothing, wigs and beauty product closeouts.

“When I met Joyce, she had collected antiques and wanted to go into business,” she said. “I had closed my business about a year and a half ago and was afraid to go out on my own.”

Ms. Westerfield had a booth at a flea market in Stuart.

“I collect copper, brass, crystal and decorative accessories,” she said, pointing to many of those objects in the front of the store. 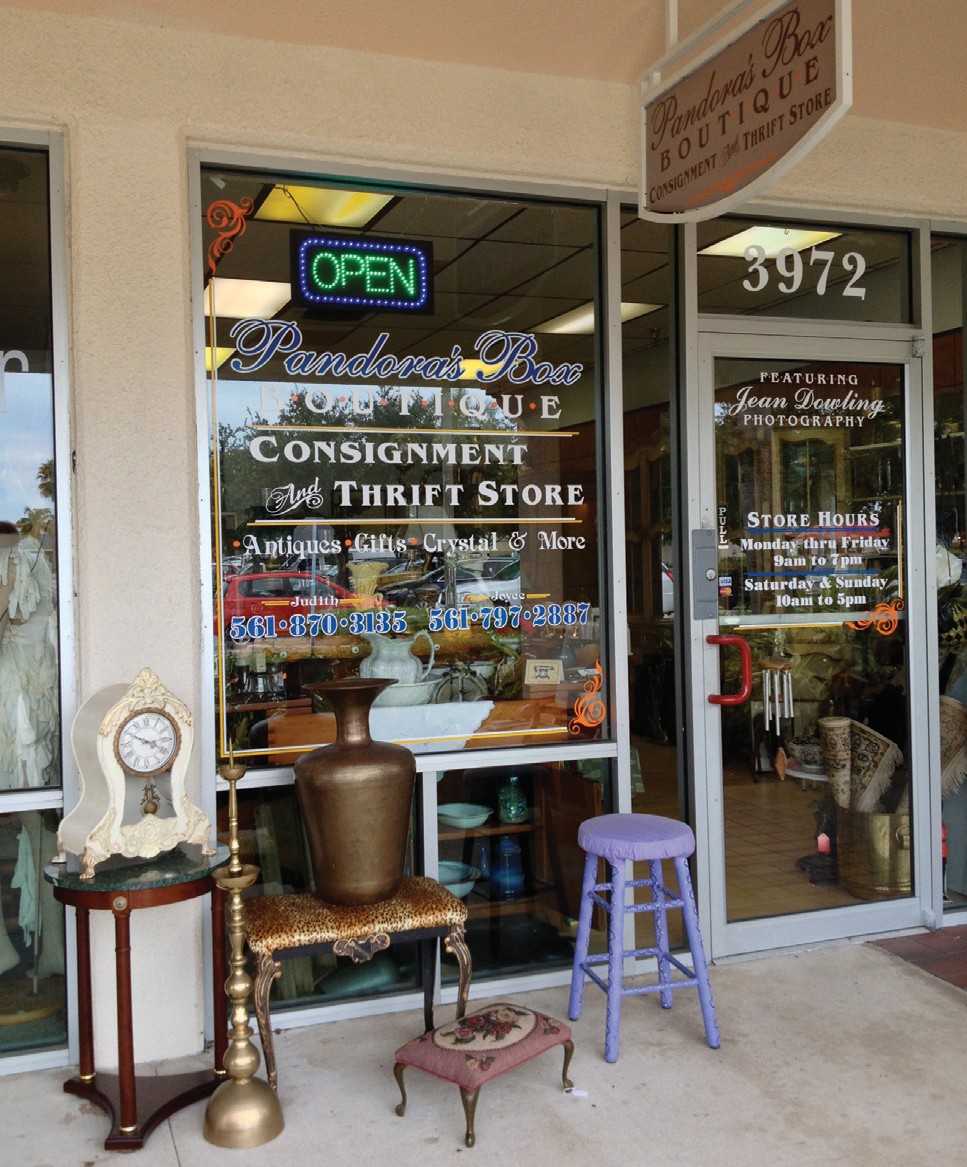 The entrance to Pandora’s Box offers a hint at the shop’s eclectic mix of merchandise.

A shelf holds a jade elephant here, a 1920s pincushion doll there.

She had a career in design of a different sort.

“I made Corvette cup holders,” she said. “I used to travel to Corvette shows to sell trim tips for ’Vettes. The trim was always damaged on the T-top latches. We designed a piece that would fit over the top of the trim to protect new trim or cover the damage on the old trim.”

She loves meeting people at the shop.

“It’s fun. It’s much nicer than sitting at home being bored. I like to be around people,” she said.

People are the main component of a business in which the more dealers there are the merrier, as least as far as drawing customers.

“We opened during the summer, which is the slowest time of the year,” said Mr. Jacobson. “Everyone who walks into the store really likes it.”

He said he plans two large events at the store in early October, a second in late October or early November.

“Everyone has been, ‘Gosh, I wish I could have that,’” Mr. Jacobson said. “Who wouldn’t like to have a big roulette spinning wheel in their house? Quite frankly, I think the store is very unique. It’s got a low-key feel and (customers) feel good about it.”

And perhaps most important of all: “There is lots of good stuff to look at.” ¦