The walking stick: bizarre and dangerous

The walking stick is one of the most fascinating bugs found in Florida. Its extensive list of nicknames clearly indicates its uniqueness. The first thing to point out about the two-striped walking stick is to keep your distance. When in danger, it will squirt — with accuracy up to a distance of one foot — a strongsmelling and caustic spray that is painfully irritating to the eyes and mucous membranes. Victims have reported that the pain is so excruciating that it is as though someone has poured hot, molten lead into your eye, impairing vision for a week or longer. If sprayed by one of these insects, you should flush the eye immediately.


Another bizarre aspect of the walking stick is that the male spends almost its entire adult life riding on the back of the female. The male is roughly onethird the size of the female and generally is positioned near the rear of the female. Forcefully separating the two will sometimes result in the death of both insects. The two-striped walking stick is similar to the millipede in that it is a detritivore, as well as a herbivore, feeding on both living and decaying plant life. It uses its chemical spray to deter would-be predators such as birds, rats, snakes and lizards. 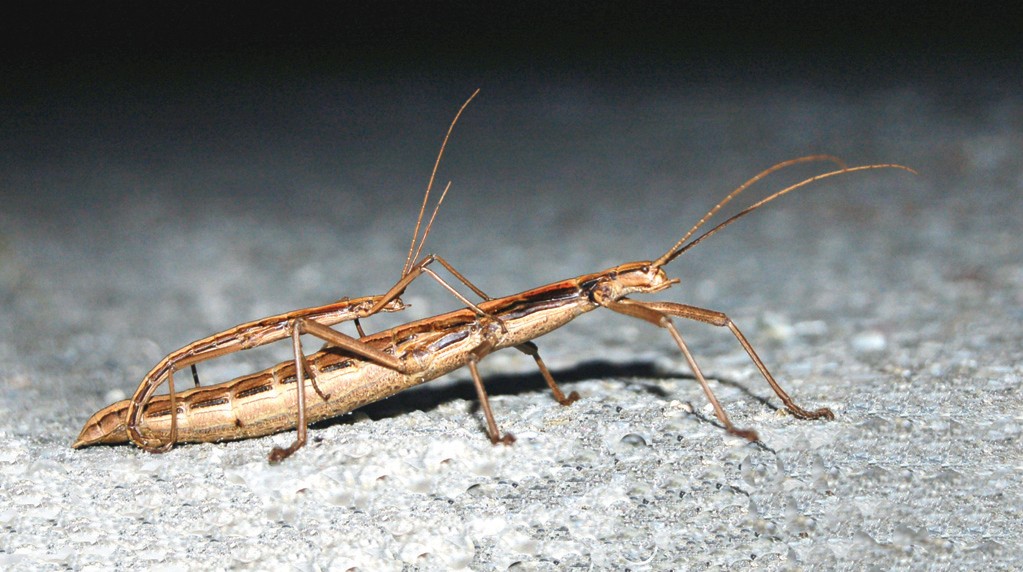 The male walking stick spends almost its entire adult life riding on the back of the female.

Some rodents have learned to keep their distance and wait until the large female has sprayed five or six times, leaving her reservoir depleted, then pounce upon her to dine. The walking stick is closely related to the family of insects known as preying mantises and many species are parthenogenetic (capable of asexual reproduction). Most of the sightings of this insect occur just before darkness falls or just prior to dawn. They are essentially a nocturnal insect and can sometimes be found at night by using a flashlight. Be careful when searching for them as they so closely resemble dead sticks that they are often stepped on by accident. 
in the know
>>Two-striped Walking Stick
(Anisomorpha buprestoides)
>>Other names:
stick bug, palmetto walking stick, devil
rider, musk mare, prairie alligator, devil’s darning needle
>>Life span:
1 to 3 years
>>Length:
2-3 inches
>>Reproduces:
in the uplands region in palmetto thickets
and dense foliage
>>Found:
throughout South Florida

— Charles Sobczak is a Florida-based writer. His newest book, “The Living Gulf Coast,” is due out this winter.

2 responses to “The walking stick: bizarre and dangerous”