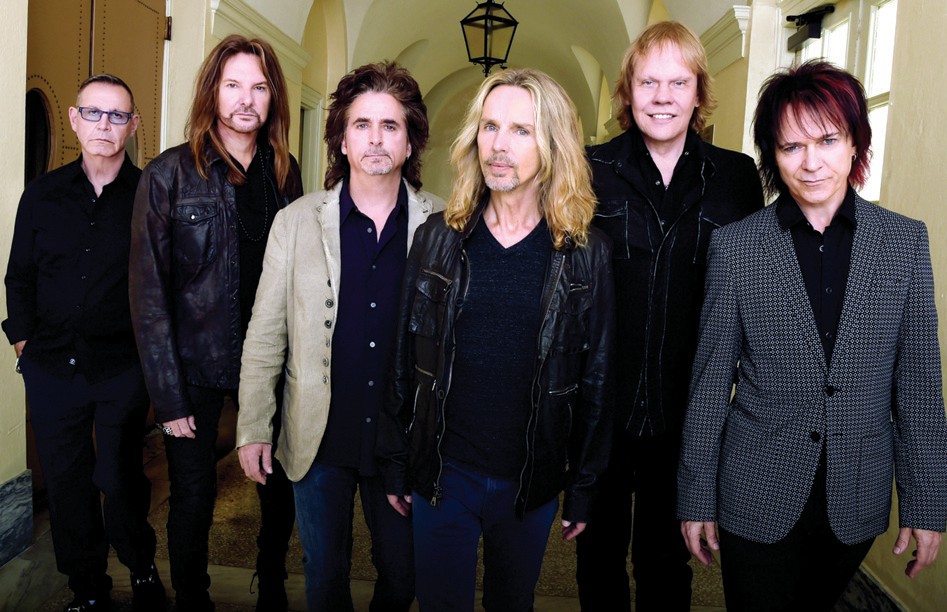 Tommy Shaw (fourth from the left) with Styx. PHOTO BY RICK DIAMOND

After spending a year mostly trapped inside his Tennessee home, Tommy Shaw needed to sharpen his guitar chops and do a little singing before Styx headed out to play its first post-pandemic shows.

So, like thousands of aspiring guitarists, he was going to put on some music and play along.

But the recordings weren’t Styx albums. Rather, they were prepared for him and the other members of the long-running classic rock band by their longtime sound engineer.

“Our front-of-house guy is incredible,” Mr. Shaw said in a recent phone interview. “He records every single show. He put together some of his favorite performances, mixed it, and we put them out for people to listen to and have a live Styx show.

“I asked ‘Could you do one of those for me and take my parts out?’ He did it, and I’ve been playing along with it at home,” the guitarist/ singer said.

Not included in those recordings, however, are songs from “Crash of the Crown,” the band’s latest album that was released last June and has added some fresh fuel for Styx, which is spending this summer sharing stages with REO Speedwagon and opening act Loverboy. That tour comes to iThink Financial Amphitheatre on June 19. 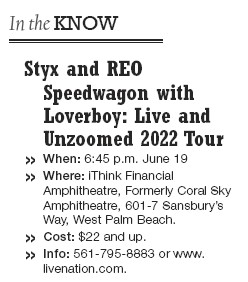 Recorded over the previous year, “Crash of the Crown” is filled with songs that take on social and personal crises, but largely come to an optimistic end.

“There’s always something going on in the world,” said Mr. Shaw, the band’s primary songwriter. “We always try to look to see where there’s a light at the end of the tunnel. And there always is.”

Mr. Shaw said two of the songs, “To Those” and “Our Wonderful Lives,” were written during the pandemic lockdown. Everything else was written years before that.

“Sound the Alarm,” for example, was written in Las Vegas, where Styx was in residence with former Eagles guitarist Don Felder. The title cut came to be in a dressing room, where the band turned a Shaw idea into a song.

“Those are my favorite dressing rooms, where we’re all in one room,” he said. “Promoters and venue people think we all want this tiny dressing room for ourselves. More good stuff happens when you’re in a community dressing room.”

Musically, “Crash of the Crown” is an amalgam of styles, ranging from passages of prog and hammering hard rock to blasts of The Beatles — a mixture that lines up with the music that influenced Mr. Shaw when he was growing up in Alabama in the 1960s and early ’70s.

Styx’s staying power, Mr. Shaw said, is the band’s ability to go in different directions and have it all on one album.

That artful versatility extends into putting together a set list. There are songs, like “Lady,” “Come Sail Away,” “Blue Collar Man” and “Mr. Roboto,” that have to be in a Styx show. But ordering them and incorporating new songs is something of an art form, Mr. Shaw said.

“When you create a set list, you want it to build up, then have a little relief, then build up again,” he said. “It’s like in church, when they told you to stand up, sit down, stand up again. You want everybody to be engaged.”

Formed in 1972, the group built a sizable grassroots following — especially in the Midwest — the band before breaking through in a big way in 1977 with “The Grand Illusion.” Then like that signature album, Styx’s next three studio albums — “Pieces of Eight” (1978), “Cornerstone” (1979) and “Paradise Theatre” (1981) — also topped 2 million copies sold.

This peak period produced most of the band’s many hits (including “Come Sail Away,” “The Best of Times,” “Blue Collar Man,” “Babe” and “Too Much Time on My Hands”). But as the ’80s went on, the band’s momentum started to stall. Over the next decade, the band broke up a pair of times in the ‘80s and early ‘90s and went through a series of personnel changes, the biggest of which was replacing original singer/keyboardist/ songwriter Dennis DeYoung in 1999 with Mr. Gowan.

The current band lineup, though, has stayed intact since 2003, and Styx has returned to being a strong draw on the concert circuit — although the pandemic created a rare large gap in Styx’s touring schedule.

The year-plus of COVID quarantine represents Mr. Shaw’s longest time off the road since the ’80s, when he took a break after the birth of his daughter.

“That was self-imposed,” he said. “It wasn’t something imposed on me, along with everybody else. I hope I never have to do it again.” ¦

One response to “Styx brings old, new together”