Steel Pulse is part of the Good Vibes Summer Tour 2022 with Rebelution. DENM also is on the bill of the concert, which will be played June 4 at Sunset Cove Amphitheater in Boca Raton. PHOTO BY PATRICK NIDDRIE

Even if Steel Pulse had called it quits after releasing their debut album “Handsworth Revolution” and its subsequent single “Ku Klux Klan,” they still would have earned their place as the most politically charged reggae band to emerge from England.

As the sons of working-class West Indian immigrants, the young Birmingham musicians were naturally drawn to the nascent Rock Against Racism movement of the late 1970s. Soon they were sharing bills with The Clash, The Specials and other like-minded bands, while expanding their own Bob Marley-influenced sound to incorporate elements of jazz, Latin and punk music. Onstage, they crossed even more boundaries, stirring up controversy as they donned white hoods and robes to perform “Ku Klux Klan” in punk clubs and on BBC Television.

But as time went on, Steel Pulse would create a different kind of controversy.

By the mid-’80s, the band’s resistance to record industry pressures had weakened. Meanwhile, the success of perfectly polished singles like “Steppin’ Out” prompted accusations of selling out. It would take more than a decade for Steel Pulse to return to its militant roots on albums like 1997’s “Rage and Fury” and 2004’s “African Holocaust,” after which they unceremoniously dropped out of sight for 15 years. 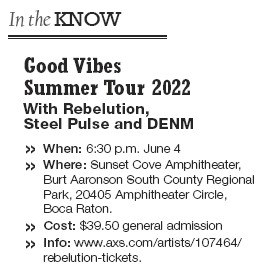 Against all expectations, Steel Pulse has returned with “Mass Manipulation,” a 17-track condemnation of police brutality, human trafficking and other social injustices. Founding vocalist, guitarist and songwriter David Hinds — along with cofounding keyboardist and arranger Selwyn Brown — have delivered a lyrically uncompromising and musically engaging album that can stand alongside the band’s best.

They are on the bill of the Good Vibes Summer Tour 2022, along with Rebelution and DENM, which makes a stop June 4 at Boca Raton’s Sunset Cove Amphitheater.

Hinds, who also boasts the most impressive dreadlocks in contemporary music, recently spoke with us about onstage violence, commercial confinement, and the circuitous route that’s brought Steel Pulse to where they are today.

Q: On the new album, you’ve combined really pleasant melodies and arrangements with politicized lyrics like “Built your goddamn country / And reaping no rewards / The land of milk and honey / We’ve even fought your wars.” It reminds me of how Bob Marley would lure you in with songs that were so catchy, you didn’t even notice how militant the lyrics were. Would you say you use a similar strategy?

David Hinds: I’d say so. But the strategy is also different in that we tend to be more direct in what we’re saying, right? If you listen to Bob Marley’s lyrics, he never really mentions specific individuals or collectives. Whereas I’ll write about the Ku Klux Klan or the National Front.

It’s like the iron fist in the velvet glove. And then what softens that blow is the music.

Q: So let’s talk about the Klan, who’ve lately been having a resurgence here in the States. Back when you started playing “Ku Klux Klan” live, you’d wear white hoods and robes. That strikes me as a pretty risky thing to do. Did it feel that way to you at the time?

Hinds: Well, it didn’t feel that way at the time, until we arrived in the United States. We were playing a hotel ballroom in Boston — it was our fifth show of the tour — and a guy jumped onstage and attacked the percussion player who was wearing the costume. The cops jumped onstage, dropped him, and dragged him off.

And then on our 1981 tour, we had this merchandise guy who’d follow us all over the United States, selling T-shirts out of the back of his car. And I remember when we got to Birmingham, Alabama, he was s—ting himself and saying, “Are you sure you want to perform in this town?”

Q: How did the Birmingham crowd react?

Hinds: Well, there was a lot of silence. I remember all the black people were in front, and the white people were watching from behind. So it was a weird kind of vibe. And then, on our next stop in New Orleans, we switched on the TV in the hotel room, and they’re talking about this guy who’d just gotten lynched about 100 yards outside his home in Mobile, Alabama. So it was, like, welcome to the South, man.

Q: Getting back to the present, 15 years is a pretty long time to go on hiatus. What happened?

Hinds: Well, when it comes to the personal aspect, I was going through some domestic issues at the time, and I just got up and left England and started hoboing — for want of a better phrase — around the world. And I did that for nine or 10 years, sometimes in the U.S., sometimes in the Caribbean, sometimes in Europe. And then we started playing some live shows to raise money for the album.

Q: How would you say the music has changed with this album?

Hinds: Well, back when we were doing albums like “Babylon the Bandit,” we leaned toward electronic drums and keyboards. This album is more organic. We don’t stack the horns a million times, like we’d normally do, to the point where they started to sound synthetic. I also think the vocal delivery on this album has more energy, and the lyrics are more focused.

Q: You did an interview back in 2000 where you talked about Steel Pulse returning to its roots, and you said, “We lost our souls, but we got them back.” What was it like, going through all that?

Q: Let’s go with being incarcerated by commercialism.

Hinds: Well, after Bob Marley died in 1981, labels started losing interest in reggae and wanted the lyrics to be watered down.

Q: So they were basically looking for the next Eddy Grant?

Hinds: It’s funny you should say that, because when we were recording the “Earth Crisis” album, and gave them the first few tracks, the first thing Elektra said to us was “Why can’t you sound like Eddy Grant?” And we fobbed them off, and just continued to record.

But it didn’t stop there. After we got to MCA, we played them the tracks for an album and they said “We don’t hear any singles here.” They suggested we record with Stephen Bray, who was Madonna’s producer, and Peter Lord from The Family Stand. So they spent an extra $70,000 to record two bloody singles!

And at the same time, we started wearing leather clothes, you know, and shirts that cost $200, and shoes that cost Godknows what. We were trying to look like we were uptown, like Lakeside or Howard Hewett from Shalamar. We were drifting so far away, it was unreal. And people were like, “What the hell are you doing?”

Q: So at this point in your career, if you were in a situation where you had to cut either “Ku Klux Klan” or “Steppin’ Out” from your setlist, which would you choose?

Hinds: Because “Steppin’ Out” is by far the more popular song. You’ve got to go through the hits, the ones where people go “wow” and they’re jumping around and enjoying themselves. With “Ku Klux Klan,” it depends on the mood, it depends on the politics, it depends on where we’re performing. I wouldn’t play it at a wedding, for example.

Q: When you were 23 years old, would you have played it at a wedding?