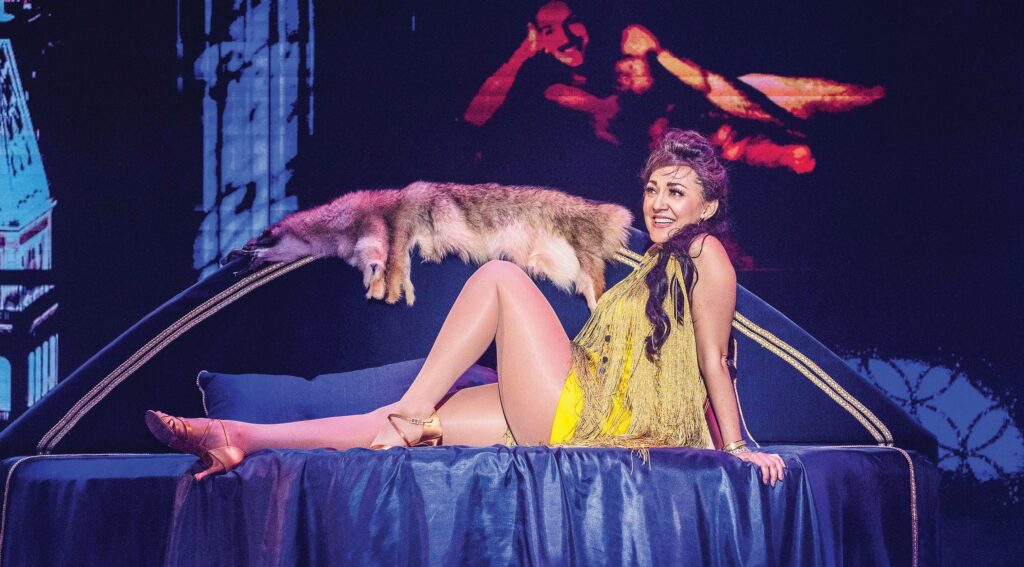 The Maltz Jupiter Theatre’s “Sweet Charity” is a well-produced and inarguably entertaining time machine visit back to when the popular musical was created in 1966 and when the cutting-edge dance craze was “The Frug.”

Focused on an adorable heroine named Charity Hope Valentine, her middle name is the underlying theme for her and her fellow dance hall hostesses who never stop dreaming of a better life.

But “Sweet Charity” also celebrates a sexist societal mindset that will aggravate anyone born after 1966 in which the impossibly naïve heroine is a willing doormat to repeated emotional abuse by various partners who use her sexually, emotionally and especially financially — and who has not a shred of self-respect until the final 20 seconds of a 2½-hour evening.

The work was penned by masters Neil Simon, Cy Coleman and Dorothy Fields, loosely based on Fellini’s 1957 film “Nights of Cabiria,” in which the heroine is a prostitute.

But it was “conceived, choreographed and directed” by Bob Fosse, whose dark cynicism clearly is evident, most prominently in the “hopeful” ending that seems included begrudgingly at best. All the hopes and dreams (such as two dancers daydreaming of becoming a receptionist or a hat check girl) are trashed by the finale. Seven years later, directing Pippin, Fosse rejected the written moderately upbeat ending that wasn’t restored until later productions. 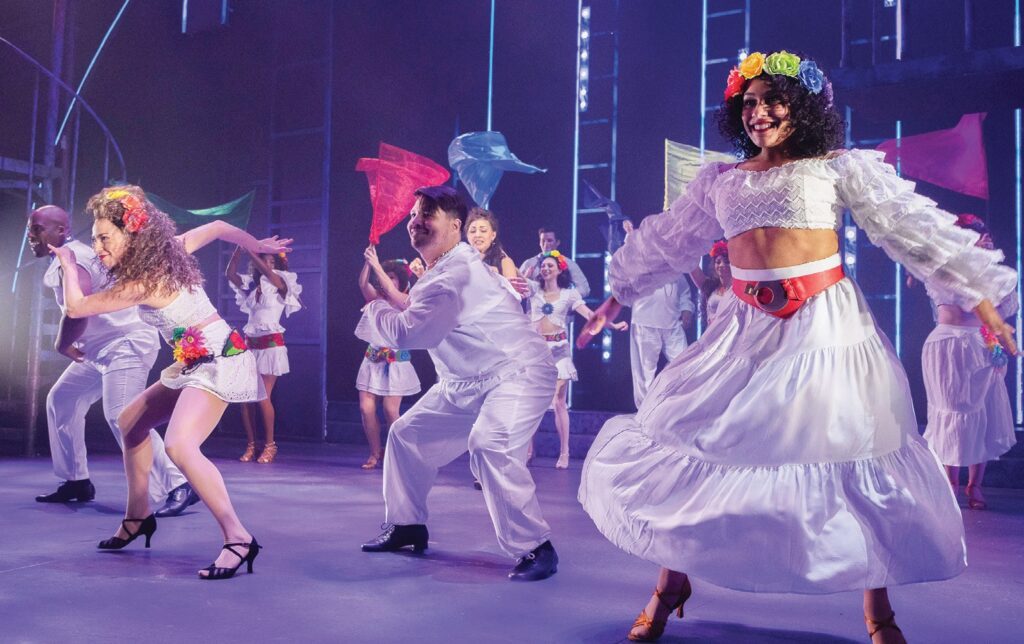 The Maltz Jupiter Theatre gives “Sweet Charity” a distinctly Latin flair, as in a production number that has everyone dressed in Caribbean white dress.

Fortunately, skilled director/choreographer Marcos Santana and music director Andrew David Sotomayor have led a solid company and, as always, a first-rate design team in delivering a vital smile of pure musical theater at the Maltz.

The polished vibe lands early on in their staging of the now iconic number of low-rent sensuality, “Hey, Big Spender,” in which a collection of hungry women who have seen better days issue a debatable invitation with an implied promise of something besides a fox trot — a number enhanced by Cory Pattak’s lighting and Jen Caprio’s costumes.

The Maltz Jupiter Theatre’s “Sweet Charity” takes audiences back to the ’60s, when the show was first produced.

Crucial to the success of any “Sweet Charity” production is whoever is playing Charity. The Maltz luckily has New York actress Jennifer Sanchez, whose fine voice, solid acting ability and winning personality make Charity someone you immediately root for — when you don’t want to shake her and tell her to wake up.

She nails some of the best-known numbers in the score with an energy and vitality: “If My Friends Could See Me Now,” “I’m A Brass Band” and “I’m the Bravest Individual.”

The problem is the part truly carries the show, more so than usual because of the material’s failings. Unfairly, it requires that inexplicable quality of a “star,” not a big name necessarily, but someone with that God-given “something” beyond talent and skill that prior Charitys exploded with: Debbie Allen, Christina Applegate, Sutton Foster, Charlotte D’Amboise, Shirley MacLaine in the movie and, of course, the originator, Gwen Verdon. God bless Ms. Sanchez, who gives everything she’s got, but that extra something just doesn’t come across.

She gets fine support from New York actor Jesse Swimm as Oscar, the neurotic nerd accountant she actually connects with and who seems to finally be the right guy offering to marry her, until…. Swimm gives us a “nice guy” who seems lost in his own body, plus a classic comic sense molded by Sanchez.

Especially notable are Ashley McManus as Helene and Erin Kei as Nickie, Charity’s colleagues with a more pragmatic world view built from experience. Their sass and verve guarantee some of best numbers in the show, such as the driving “There’s Gotta Be Something Better Than This.”

Several of the skilled knife-sharp ensemble members also play featured roles, such as Sergi Robles as Vittorio, the handsome Italian actor who Charity meets, and Brett Sturgis as Daddy Brubeck, the pastor of a pseudo-hippie alternative “church.”

Santana skillfully makes the most of the humorous situations Simon has set up. In one, Charity is hiding in the Vittorio’s closet when his real lover is at the door. While in the closet, Sanchez and Santana have the good-natured Charity killing time by smoking and putting her ashes in a plastic suit cover and dumping a chicken leg into a tuxedo pocket.

Even better, when Charity and Oscar are trapped in a stalled elevator, Santana choreographs the claustrophobic Oscar into a score of hilariously convoluted body positions in every corner and surface of the tiny space.

Besides the sexism, the musical’s script may be funny, but it’s not one of Simon’s best. Primarily, it’s built to always be looking for a way to show off Fosse’s dances. Indeed, there’s the second act’s first musical number called “The Rhythm of Life,” in which the straight couple visit that pseudo-church. It is energetic, droll and absolutely had not a single thing to do with the plot, with the characters, with anything but provide Fosse another big production number.

The current script may have been tweaked. It opens with the latest cad she thinks is a fiancé pushing her into Central Park lake and snatching the purse she brought with a hard-earned modest dowry. The original script ended with Oscar also pushing her into a lake, but, hey, he does not rob her. So now in this production, he just walks off.

Since there are as many production numbers with extensive dancing as there are book scenes, the show benefits mightily from Santana’s dexterous physical imagination, only slightly echoing Fosse’s work and period choreography as in the lengthy “Rich Man’s Frug.”

The integrated set design by Adam Koch, lighting by Cory Pattak and video design by Steven Royal is outstanding, especially its use of arcs of neon and effective environment-setting projections. Notably, when Charity visits Vittorio’s ritzy apartment, the back wall has a large painting of Vittorio lying nude ala Burt Reynolds’ famous photograph.

Cy Coleman’s score is blessed here with a rousing, muscular, brass-infused live circus worthy orchestra — one of the best we’ve heard locally — led by Sotomayor and including Steve Sigmund, Ransom Miller, Rob Ercolano, Esther Platt, Phil Fest, Jeff Carswell, Loni White and the brilliant percussion of Roy Fantel. The sound is crystal clear, although once in a while, the engineer allows them to cover some of the singers’ less audible passages.

It’s rare that backstage dressers get much credit, but Paula Calvo and Amera Spagnoli deserve some kind of award because the ensemble’s costuming is transformed over and over in a matter of seconds with this pair’s aid — and likely some ingenious double-dressing by Caprio.

Producing Artistic Director Andrew Kato underwent significant training in diversity issues during the pandemic and has committed to more diverse elements in his shows, including racially and diverse casts. In this case, he auditioned for Charity specifically seeking a Latina actress. Spanish phrases are sprinkled throughout the show and Charity sometimes gives her full name in Spanish because she is Puerto Rican in this production. One production number has everyone dressed in Caribbean white dress.

A couple of times in the show, someone states the governing idea — “without love, life has no purpose.” Well, given how Charity gets little of it, except from her dance hall friends, perhaps Charity’s real mantra is Annie’s “The Sun’ll Come Out Tomorrow.” ¦