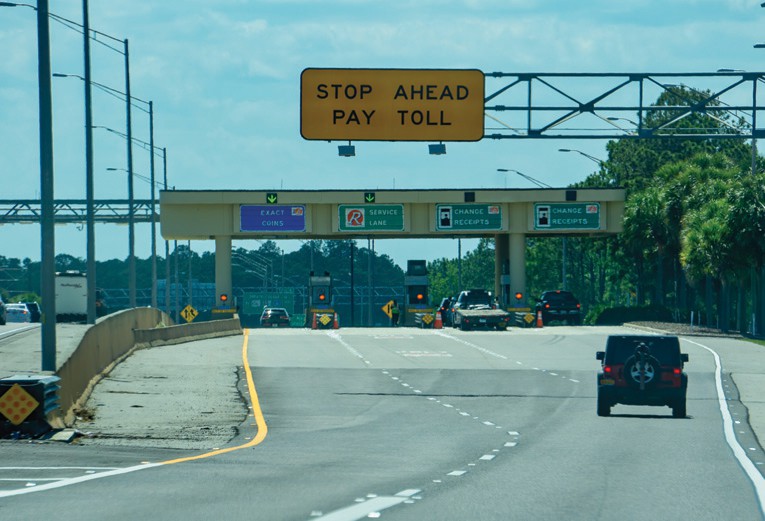 Overhead road direction signs found on an approach to one of Florida’s toll plazas. SHUTTERSTOCK PHOTO

Task forces that will study and make recommendations about three major toll-road proposals will be committed to protecting farmland and natural springs in the western side of the state, Florida legislative task force members were told last week as they formally kicked off the work.

Still, critics who fought the projects during this year’s legislative session because of concerns about sprawl and environmental damage maintain the proposals are moving too fast. Reports from the task forces are due in 13 months, and construction is slated to begin in three years.

The proposed roads, a major priority of Senate President Bill Galvano, R-Bradenton, would expand the Suncoast Parkway from the Tampa Bay area to the Georgia border; extend the Florida Turnpike west to connect with the Suncoast Parkway; and add a new multi-use corridor, including a toll road, from Polk County to Collier County.

Members of the three task forces — known as the “Multi-use Corridors of Regional Economic Significance,” or M-CORES, task forces — were given basic instructions last week at the Tampa Convention Center on what they need to consider when reviewing the impacts of the proposed roads.

View of a tollbooth on a Florida road. More toll roads are being planned across the state. SHUTTERSTOCK PHOTO

“This is really a defining moment for our state,” Department of Transportation Secretary Kevin Thibault said during the meeting of the task forces. “These roles are essential to be able to achieve what is in front of us, a Florida that is prepared for growth and population but still protects everything that makes the Sunshine State the best in the country.”

Sen. Galvano described the roads as a “new approach” in planning the state’s future, reducing congestion, providing alternative evacuation routes, and offering a way to “revitalize” rural communities through the expansion of broadband, water and sewer infrastructure.

“Without fixed broadband connectivity, you lose capital investment, commerce opportunities, but most importantly students are unable to achieve the most high quality education because of the lack of that most valuable resource,” Sen. Galvano said.

Lindsay Cross, government relations director for the Florida Conservation Voters, called it “disconcerting” the corridors are being presented as “a done deal” when the long-term vision is being given only a 13 months review.

“We have to question what is the urgency of this happening so quickly,” Ms. Cross said. “It makes it feel like it’s more politically driven than community driven.”

The proposal (SB 7068) has drawn mixed reviews from conservation groups and even local governments, where concerns have been expressed about sprawl.

Officials with Citrus County, which has three commissioners serving as task force members, voiced support for efforts to extend north the Suncoast Parkway.

“We feel it’s going to be a very productive impact on our county when it comes to economic development,” said Citrus County Commissioner Scott Carnahan, a task force member.

“Our board a few months ago talked about sending a resolution saying we were against it,” Mr. Gray said.

However, Mr. Gray said he convinced the other board members “that we need to be at the table.”

“We’re looking forward to working with the group to find the solutions that work best for our community,” Mr. Gray said.

Each task force is comprised of about 40 people, including local officials, environmentalists, representatives of agricultural interests, transportation planners, members of business groups and educators.

The task forces include representatives from 1000 Friends of Florida, Audubon Florida, Defenders of Wildlife, The Nature Conservancy and the Florida Wildlife Corridor.

“We’re very interested in this process both for how any transportation services that would be provided as well as for how it might impact growth and development where a corridor might pass through,” Mr. Hawkins said.

Task force member Kent Wimmer, senior Northwest Florida representative for the Defenders of Wildlife, said the goal is to maintain existing wildlife corridors in the areas of the roads.

Lawmakers designated $45 million toward the work in the current year, with annual funding expected to grow to $140 million.

Supporters, such as Sen. Galvano, tout broader benefits from the projects than simply building roads. Such benefits include expanding broadband in the corridors.

Sen. Galvano said in counties that could be impacted by the roads, such as Gilchrist, Jefferson, Levy and Dixie, broadband isn’t accessible to 79% to 99% of residents.

Mr. Thibault, noting the Florida Turnpike was started in 1955 in anticipation of growth in Southeast Florida, added that the proposed toll roads are needed to confront Florida’s population growth, which is averaging about 900 people a day.

“All that growth requires the transportation needs to be able to efficiently and effectively move the people throughout the state,” Mr. Thibault said. ¦