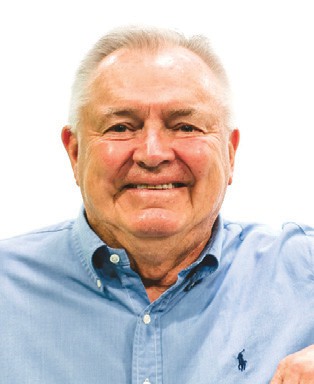 Three Florida authors who will share their voices at the Florida Voices book discussion series at the Society of the Four Arts King Library in Palm Beach include Les Standiford, Deborah C. Pollack and Rick Kilby.

The series, funded by the Brotherton Endowment, restarted in 2014, bringing authors who live part-time or full-time in Florida, to speak once a month, October through April.

“Florida Voices began when Molly Charland (former director of Campus on the Lake and the King Library) decided to invite authors to speak,” says Rachel Schipper, director of libraries at the Society of the Four Arts.

“The series continues to be very popular and educational,” Ms. Schipper says.

Ms. Pollack, an art dealer who owns a gallery on Worth Avenue, along with her husband, Edward Pollack, will speak about her book, “Florida Sculptors and their Work: 1880-2020,” published by Schiffer. 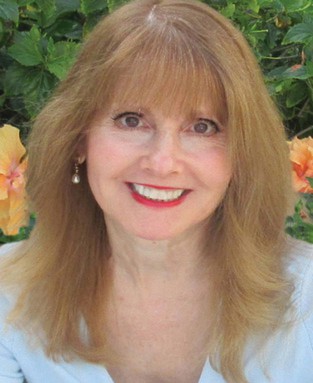 “Although we look at art, including public art, many times we don’t really see what we’re looking at,” says Ms. Pollack, the author of nine books, including, “Laura Woodward: The Artist Behind the Innovator Who Developed Palm Beach.”

“To really understand a sculpture, we must walk around it, examine it, think about the sculptor’s intentions and what messages he or she is trying to convey to us, the viewer,” she says.

“I hope this book will help people understand how to view a sculpture,” says Ms. Pollack.

Likewise, Mr. Standiford, who loved the circus as a kid in Cambridge, Ohio, wants people to understand the glamour and glory of circuses, which have disappeared from the landscape.

In “Battle for the Big Top: P.T. Barnum, James Bailey, John Ringling and the Death Defying Saga of the American Circus,” Mr. Standiford brings to life a slice of Americana that lives on in nostalgia and our collective memories. 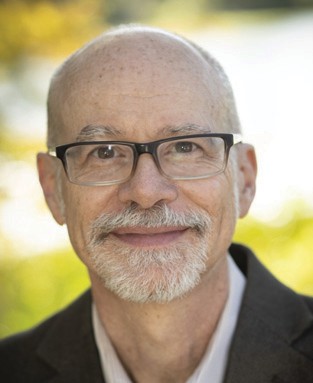 “When the circus came to town everything stopped,” recalls Mr. Standiford. “There was so much glamour, excitement and glory. Schools and stores all closed. Everybody went down to Main Street to watch the parade.”

“I want to re-capture the pleasure and thrill of the circus,” he says.

In May 2017, Mr. Standiford witnessed the last Ringling Brothers and Barnum & Bailey Circus at the Nassau Coliseum on Long Island and is sad for its demise.

“I want people to recall how important the circus was to the country,” he says.

“Remember,” he says, “this was a time before professional football, before movie theaters or radio. It was a popular form of entertainment for young, old and everyone in-between, for more than 100 years.”

“When the circus came to town, it was a day to revel, take a day off and most important, to see that you could come to this country and remake yourself,” he says. 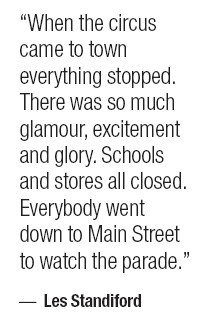 “The circus was more than diversion or entertainment, it was a reflection of the country and the principles that drew people to it,” Mr. Standiford says.

He says that the Feld family (the family behind the circus) has plans to revive the circus more in line with Cirque du Soleil, without the animals that caused the animal rights protests.

The author, who has written more than 25 books, including “Palm Beach, Mar-a-Lago, and the Rise of America’s Xanadu,” is already at work on his next one about Don and Mera Rubell, tentatively titled, “Greatest Private Contemporary Art Collection in the World.”

Another author writing about his passions is Orlando-based Mr. Kilby.

A Florida native and former creative director of the Church Street station attraction in Orlando before launching Kilby Creative, Mr. Kilby became interested in Florida’s healing waters in 2000 after visiting “the tourist trap” of Ponce de Leon’s Fountain of Youth in St. Augustine and wrote his first book, “Finding the Fountain of Youth: Ponce de Leon and Florida’s Magical Waters,” which won a Florida book award in the visual arts category. 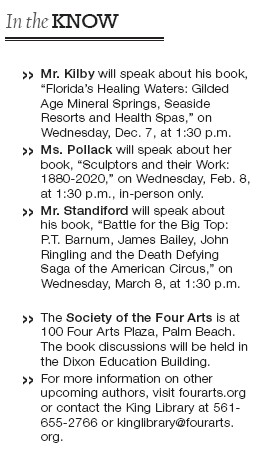 In “Florida’s Healing Waters: Gilded Age Mineral Springs, Seaside Resorts and Health Spas,’ Mr. Kilby takes readers to the “Golden Era of Bathing” in Florida when tourists flocked here for restoration and renewal in its oceans and mineral springs.

Mr. Kilby says he became obsessed with the topic and made pilgrimages to many of the sites in Florida, including White Springs in North Florida and the Suwannee Springs on the Suwannee River in Live Oak.

“I love this era in Florida history,” says Mr. Kilby. “People came on steamboats and trains. I learned about sea bathing and the practice of hydrotherapy in large tourist hotels and visitors who came to bathe in our waters for medicinal reasons,” he says.

For those looking to “take the waters,” he suggests Green Cove Springs on the St. John’s River between Jacksonville and St. Augustine, Safety Harbor Resort and Spa in Clearwater and Warm Mineral Springs in North Port, Sarasota County.

He and his wife recently bathed in the waters in Warm Springs in Bath County, Virginia, where Thomas Jefferson spent nine days in 1817.

He hopes to tour the springs and spas in Germany and the Czech Republic as part of a historic spas of Europe tour.

Noting that people are born in water, love to be near water and in the water, Mr. Kilby says, “You can reach a level of relaxation in these springs that’s pretty amazing.” ¦