Bumblefest marks a milestone by rocking the 500 block of Clematis Street with indie music. 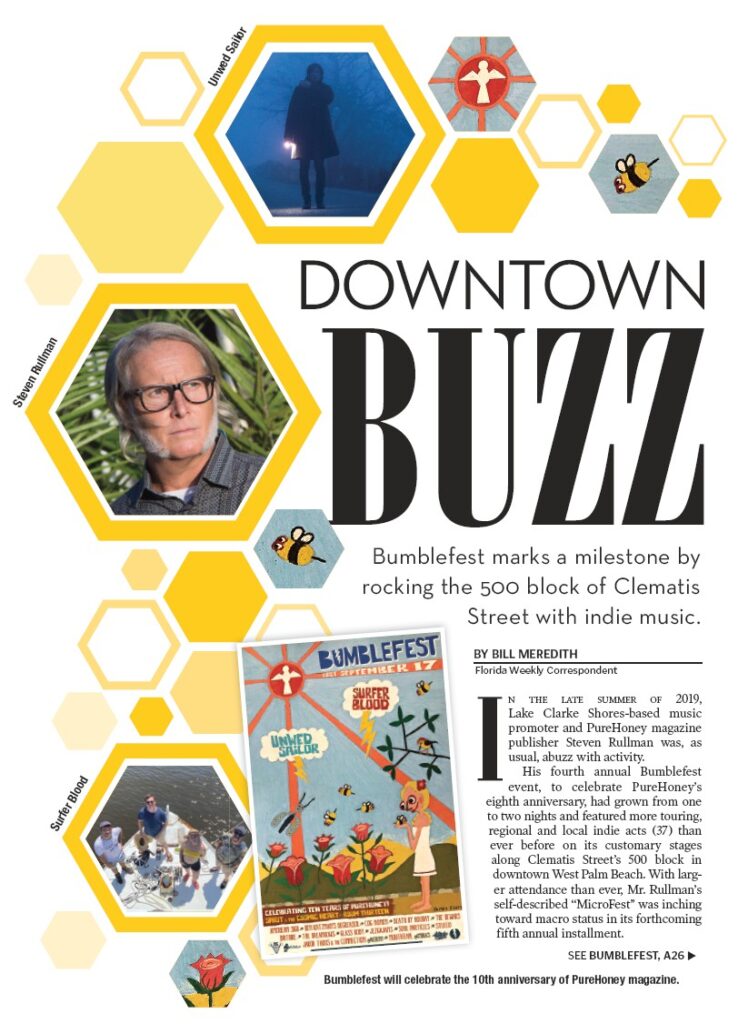 IN THE LATE SUMMER OF 2019, Lake Clarke Shores-based music promoter and PureHoney magazine publisher Steven Rullman was, as usual, abuzz with activity.

His fourth annual Bumblefest event, to celebrate PureHoney’s eighth anniversary, had grown from one to two nights and featured more touring, regional and local indie acts (37) than ever before on its customary stages along Clematis Street’s 500 block in downtown West Palm Beach. With larger attendance than ever, Mr. Rullman’s self-described “MicroFest” was inching toward macro status in its forthcoming fifth annual installment.

“In the first week of March 2020, I’d flown out to San Francisco for the 30-year anniversary for Slumberland Records,” Mr. Rullman said. “Getting on and off planes, I noticed people starting to wear masks. By the time I got back home, everything was pretty much shut down. So I knew that I wasn’t going to start preparing for a festival when there was a likelihood I’d have to cancel it.” 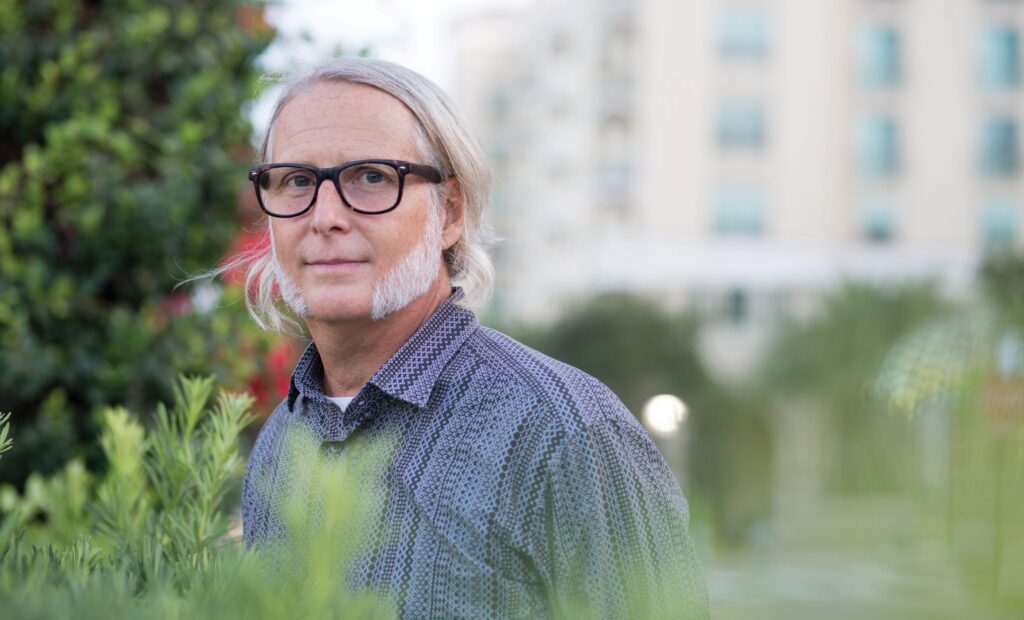 Steven Rullman founded PureHoney a decade ago and produces Bumblefest. He had to skip hosting the music festival last year, thanks to COVID-19. “You have to go with the flow,” he said. “There’s always a solution. You step back, breathe, and carry on.” COURTESY OF MONICA MCGIVEN

Such has been the ongoing legacy of COVID-19, at least for those fortunate enough not to be adversely affected medically. But the Boynton Beach native couldn’t be kept down for long.

“You have to go with the flow,” he said. “There’s always a solution. You step back, breathe, and carry on.”

On Sept. 17, Mr. Rullman’s delayed fifth presentation of Bumblefest celebrates PureHoney’s 10th anniversary by flowing through five different venues along the 500 block of Clematis Street — the one block in the area that’s stayed true in presenting live music since the 1980s, as opposed to tourist-friendly dance music and karaoke.

Eighteen acts will perform, with East Coast-West Coast headliners. The former is local rock heroes Surfer Blood, with four graduates of Dreyfoos School of the Arts in West Palm Beach (singing guitarists John Paul Pitts and Mike McCleary, bassist/ vocalist Lindsey Mills, and drummer Tyler Schwarz). Pitts and Schwarz formed the band in 2009, and it’s since become a touring sensation and released a handful of albums. The latest, “Carefree Theatre” (2020), also features McCleary and Mills and is named for the landmark concert and film venue in West Palm Beach damaged by hurricanes, torn down in 2016, and now a vacant lot. 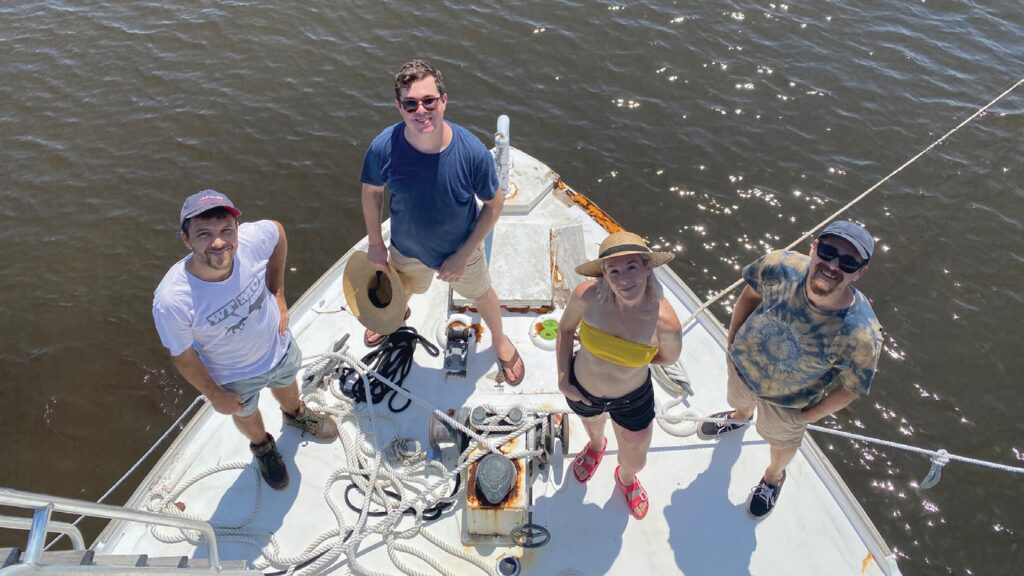 Surfer Blood will play Bumblefest after touring this summer. “We just got back from a 30-day tour,” singer-guitarist John Paul Pitts said, “and it still just feels like playing with your friends.” COURTESY OF CHARLES ELMORE

Surfer Blood’s second CD, “Pythons,” was even released in 2013 on the major recording label Sire, an imprint of Warner Bros. For “Carefree Theatre,” the band returned to Brooklyn-based Kanine Records, the independent label that released its 2010 debut Astro Coast and helped launch the undaunted quartet toward road-warrior stardom.

“We just got back from a 30-day tour,” Mr. Pitts said in late August, “and it still just feels like playing with your friends.” 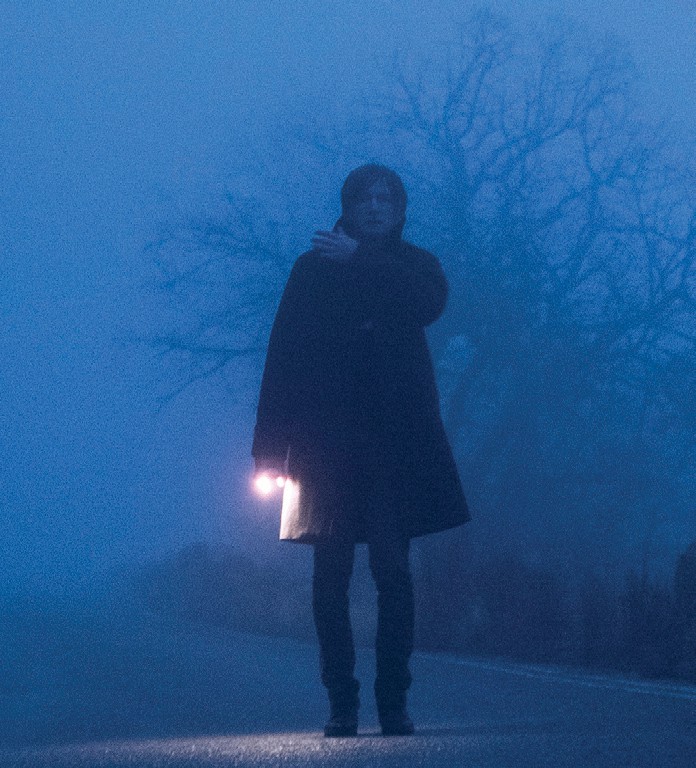 Unwed Sailor, an ambient, mostly instrumental project, is a headliner for Bumblefest. COURTESY OF CHARLES ELMORE

“I’ve wanted Unwed Sailor to play Bumblefest for a while,” he said, “but was never able to align our touring schedule with the date until now. I’ve known Steev for many years, and consider him one of the best promoters I’ve worked with in the past 25 years.”

“As Spirit started playing shows, Pure-Honey’s and Steev’s were names that came up in most circles we found ourselves in,” said Joshua Miller, guitarist/vocalist for Spirit & the Cosmic Heart. “His impact on Florida and the Southeastern U.S. reaches further than most people realize.”

With its online presence and a print circulation of 8,000 copies between Stuart and Miami, the free PureHoney presents influential previews of local and touring acts, a Soundcloud playlist of Mr. Rullman’s selections, and full-color graphics including a middle foldout poster. It’s proven profitable for Mr. Rullman in an era when many print publications have gone under, or downsized, from printing costs and being usurped by the Internet. Yet the pandemic slowed its roll, reducing it to bi-monthly since venues cut back on live shows last year, with hopes of returning to monthly whenever the pandemic recedes. When Chris Mineo, production manager at Martin County-based Stuart Web Inc., reminded Mr. Rullman of the 10-year milestone as the presses started rolling on his anniversary issue last month, he resisted the urge to celebrate.

“I had New York City acts lined up this year that canceled because of COVID-19,” Mr. Rullman said, “so I couldn’t get some touring bands wrapped into Bumblefest. There are more Florida acts scheduled this year than in 2019, although most aren’t from this area. I would’ve attempted to make it a two-night event otherwise, but I decided to keep it simple and just go with one night again. But we plan to offer a limited 32-ounce crowler of pilsner beer for sale in conjunction with Mathews Brewing Company in Lake Worth Beach. All the venues will have the Bumblefest brew on tap, and the collector cans are available at Respectable Street.” 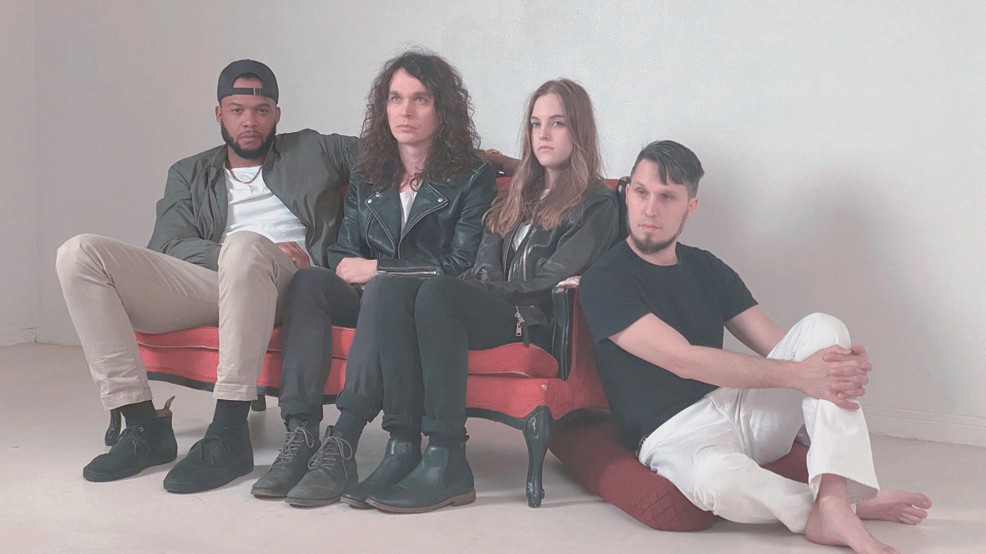 Spirit and the Cosmic Heart is based in Lakeland. COURTESY PHOTO

Surfer Blood and Unwed Sailor will both perform on the indoor stage at Respectable Street, one of the longest-lasting alternative nightclubs in the Southeast. Other acts throughout Bumblefest’s five venues and six indoor/outdoor stages include American Sigh, Beautiful Disaster, Ben Katzman’s Degreaser, Cog Nomen, Death By Holiday, The Dewars, The Dreambows, Glass Body, Jakob Takos & the Connection, Jezkajams, Mouthtape, Nervous Monks, Soul Particles and Stucco.

While it’s easy to assume that most Bumblefest performers appear mainly for the buzz of presenting their original material to an appreciative live audience, it’s important to remember their additional motivation as fellow music fans. 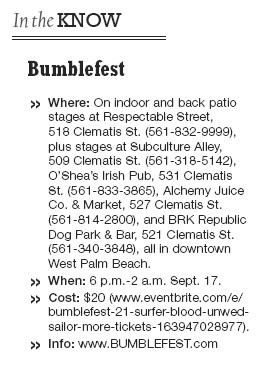