A Nose for Bones 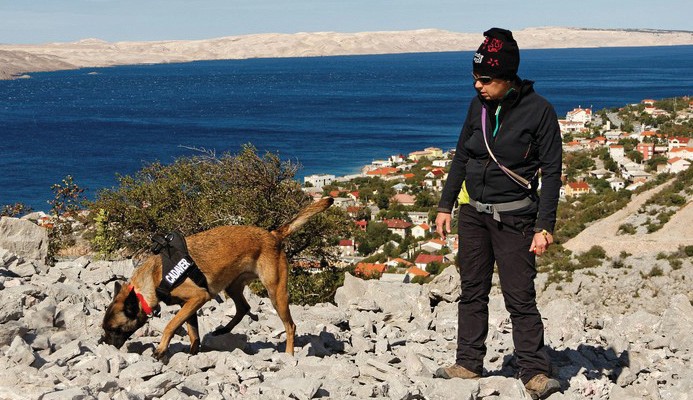 Increasingly, dogs are contributing to the detection of human remains, even from the ancient past. PHOTO COURTESY OF VEDRANA GLAVAS

If you read mysteries, you’ve probably run across more than a few where a random dog finds a dead body or uncovers buried bones. Or perhaps the detective is working with a cadaver dog: one trained to detect the odor of human decomposition.

The next one you read might feature a dog helping to solve archaeological mysteries.

In a 2018 paper published in the Journal of Archaeological Method and Theory, archaeologist Vedrana Glavas and ethologist and dog handler Andrea Pintar proposed that human-remainsdetection dogs could be valuable tools for locating ancient burial sites. They based this idea on their work with four dogs at a prehistoric site in Croatia. Their research demonstrated that HRD dogs could detect trace amounts of specific human decomposition odor and indicate burial sites considerably older than had previously been thought possible. Using radiocarbon dating and analysis of material culture (the objects found at the site), the excavated burials were dated to the eighth century BCE.

Dogs have formally played a role in finding bodies for criminal investigations since at least 1974, and it’s no surprise that other professionals have wondered if dogs could contribute to their work, as well. Forensic anthropologist and K-9 handler Paul S. Martin’s interest in the abilities of cadaver dogs to aid archaeological surveys and cold case investigations began in 2002, when he established HRD Specialized K9 Training. He says the most interesting and rewarding work he has done — in partnership with Ziva, an 11-year-old black Lab — has been participating in the search for and recovery of the remains of missing American service members from World War II through a nonprofit organization called History Flight.

“These men died in the service of our country 75-plus years ago, and families were told they were unrecoverable,” he says. “Some of these were intentional burials, but with the air crews, they became buried due to impact or accumulation of sediment over time.”

When it comes to more ancient burials, Martin, who was not involved in the study performed by Glavas and Pintar, says several universities are working on understanding human decomposition and the volatile organic compounds — the odors that the dogs detect — that it produces.

“One of the things we can already see is that, due to the changes in diet, there are compounds present in modern remains that don’t present in historic or older remains,” he says.

Archaeologists use techniques as basic as field surveys — gathering information through observations, sketches and interviews with local people, for instance — and as high-tech as groundpenetrating radar, satellite imaging and aerial photography. Like those techniques, HRD dogs provide information in a non-destructive way. At the Croatian site, geological characteristics and environmental conditions made visual inspection and GPR impractical, but didn’t deter the dogs.

“The dog adds the ability to gain another layer of information about what might be in an area,” Martin says.

That’s important, especially at sites that may be facing development. Dogs can help to focus searches before bulldozers move in.

“Locating burial grounds using HRD dogs has great potential in preventive archaeology,” Glavas and Pintar write in their paper. That’s the detection and study of archaeological sites prior to construction or other development.

Currently, Glavas isn’t working with HRD dogs on any site, she writes in an email, but she doesn’t rule it out.

“We have some plans for the future, but we will see.” ¦